Tips and tools for monitoring AWS S3 buckets with CloudWatch.

With the AWS CloudWatch support for S3 it is possible to get the size of each bucket, and the number of objects in it. Read on to see how you can use this to keep an eye on your S3 buckets to make sure your setup is running as expected. We’ve also included an open source tool for pushing S3 metrics into Graphite and an example of how it can be used.

CloudWatch lets you collect pre-defined metrics for the AWS services that you use, and also lets you report and store your own custom metrics. Threshold-based alerts (“Alarms”) can be set to notify as well as to take other actions (like scaling up an ASG). You can also graph your metrics and setup dashboards.

For most people though, the CloudWatch APIs are a way to get metric data on the AWS resources that they use. It’s usually simpler to pull the “Basic Monitoring” (lower frequency and less rich) data out of AWS and feed it in to your regular monitoring infrastructure.

Here are some CloudWatch terms that you need to know:

For a certain AWS service, like say ASG, you can find the list of metrics and dimensions in it’s documentation (like this one for ASG). You can also see the list of all services and the metrics+dimensions that they report, in this CloudWatch documentation section.

This page does a good job of detailing the CloudWatch concepts, and is a good starting point to dig deeper.

Now let’s see how we can pull metrics data out of CloudWatch.

Getting at CloudWatch Data

The “Basic Monitoring” metric data can be queried via the CloudWatch APIs without having to enable anything explicitly. From the API set, the two APIs most interesting for us are ListMetrics and GetMetricStatistics.

Note that when using GetMetricStatistics, you have to identify the metric completely, including all the dimensions that ListMetrics reported.

There were 7 metrics totally, reported by a single EC2 instance with the instance ID i-fe0c9270. You can see how the instance ID comes out as the value of the dimension named “InstanceId”.

Forming the arguments for the get-metric-statistics command isn’t pretty. Remember that we need to identify the metric with namespace, name and dimension, the duration with start, end times and the period and finally also the statistic function to be used for aggregation. Here is how it looks:

We asked for data between 9:53 and 10:53 (UTC), split up into 5 minute periods (which also happens to be the frequency for “Basic Monitoring”), aggregated as an average. AWS returned 6 datapoints, covering the time from 9:53 to 10:18 (because it was not yet 10:53 when the query was run). It also said the units for the metric was “Percent”, and wasn’t nice enough to sort the data for us. These cases are handled in the tool we describe below – read on!

The CloudWatch metrics that S3 provides can be found here. There are two of them:

There are also some gotchas:

Here are some ready-to-run commands you can use:

A tool for accessing the S3 Metrics

It seems natural to collect these metrics each day, and hand it off to a Graphite daemon for storage. So here’s a tiny tool that we wrote which does just that. It’s written in Go and uses the official AWS Go SDK. Let’s try it:

When invoked, s3report will collect the size (per storage class) and count for each S3 bucket and report it to a Graphite daemon (by default at 127.0.0.1:2003). Be sure to set the usual environment variables AWS_ACCESS_KEY_ID, AWS_SECRET_ACCESS_KEY and AWS_REGION before running it.

If the metrics for the day are not ready when you run it, use the “-1” flag to collect the previous day’s metrics.

s3report is simple enough to hack on (it’s a single Go source file), is MIT-licensed Open Source, so feel free to dig in and tweak it to your needs.

Gathering this type of information, storing, seeing and alerting on it is a common need in modern cloud infrastructure. OpsDash lets you consolidate your regular server, database and service monitoring, with custom and application metrics.

The OpsDash Smart Agent comes with built-in StatsD and Graphite interfaces. It accepts, aggregates and forwards these metrics to the central OpsDash servers, where you can visualize them on custom dashboards, set alerts and get notified. 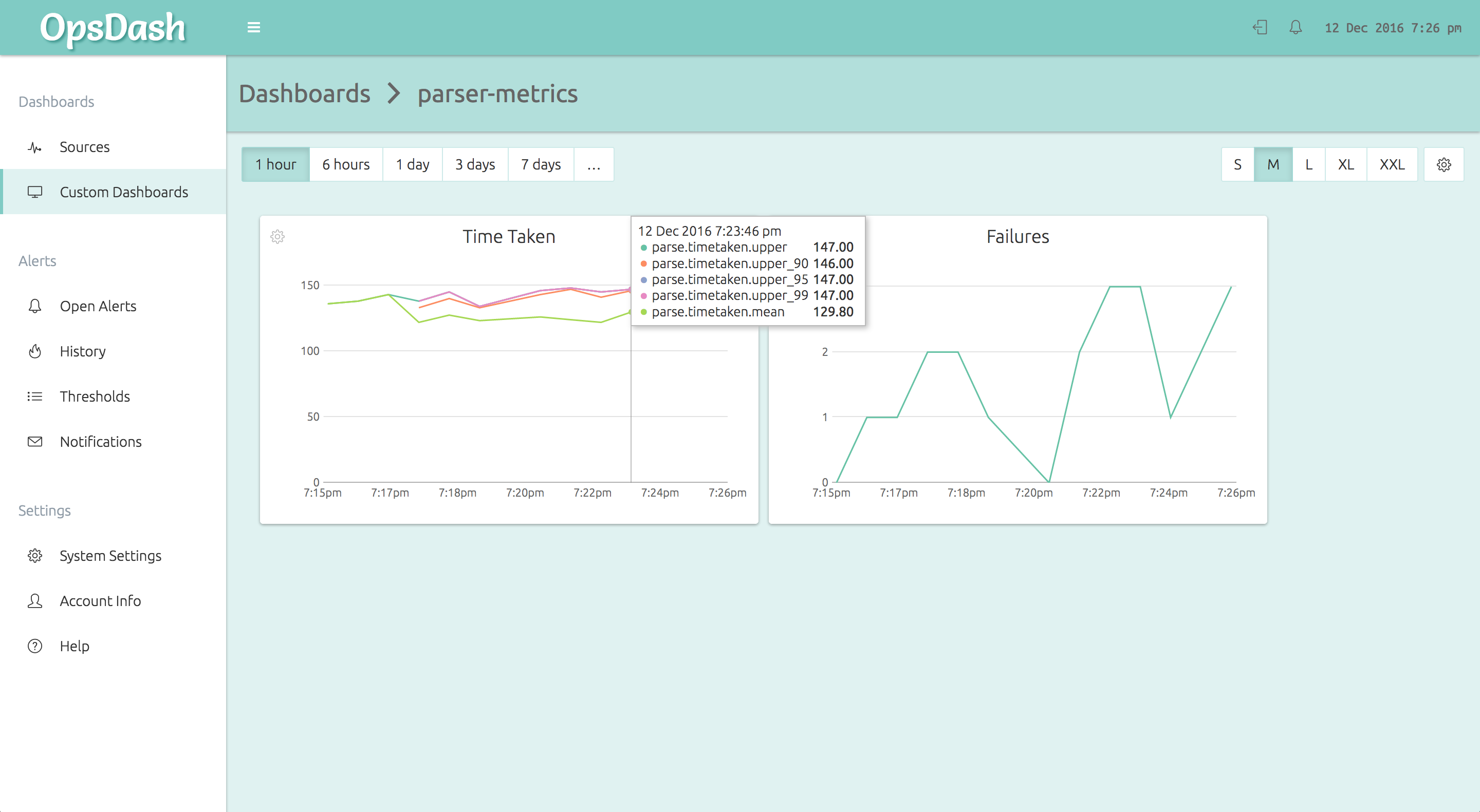