All about WAL archiving in PostgreSQL.

PostgreSQL comes with the tools you need to perform backups, incremental/continuous backups, and do point-in-time-recovery from backups. Archiving WAL files is a fundamental operation that facilitates these features. Read on to learn more about what it is all about.

What is a WAL, anyway?

WALs are used in nearly all modern RDBMS systems to provide durable and atomic transactions. Simply put, any transaction performed on the database is first written out as a WAL file, then applied to the actual on-disk table data files. WAL files are strictly sequential. This makes the WAL file sequence a “replay log” of changes.

The concept is similar to Redis’ AOF, MySQL’s binlog and MongoDB’s oplog.

So are they actual files? Yes. They live in $PGDATA/pg_xlog, where $PGDATA is the data directory, like /var/lib/postgresql/9.6/main. They are binary files, 16MB each.

Won’t they keep piling up? They will, if you don’t tell Postgres when to clean up. You can limit these files by number (wal_keep_segments) and/or total size (max_wal_size).

As you keep modifying the data in the databases on a server, WAL files keep getting generated (and discarded after a while).

If you save a copy of each WAL file that was generated, you could replay back the entire set of changes into another server. Doing this in real-time is better known as replication. You can read more about PostgreSQL replication here.

[Side note: Technically, there is one sequence of WAL files for single instance of a running PostgreSQL server. The WAL files would contain all the changes across all the databases managed by that instance.]

In PostgreSQL terms, copying out generated WAL files is called archiving, and getting the server to read in a WAL file and apply it is called restoring.

Since PostgreSQL does not know how you’d like to archive the WAL files, you’ve to supply a script. PostgreSQL will invoke this script as and when each WAL file is ready for archiving. The script has to process it (typically copy it to a safe location) and report whether it was successful, via the exit code (that is, exit 0 from your script on successful completion).

Once the script has successfully processed a WAL file, the server is free to delete or recycle it when it sees fit.

The script is set using the archive_command configuration setting. (docs). Here are some examples:

While writing your own script, keep in mind a few things:

By default, WAL files contain only the information needed to recover from a crash or immediate shutdown. This is the minimal WAL level.

The next level is archive (or replica in version 9.6 and above). Setting the WAL level to archive or above gets the server to include enough information to allow the archival (and restoration) of WAL files.

The level after that is called hot_standy (also mapped to replica in version 9.6 and above), and includes information required to run read-only queries on a standby server.

With the last level logical, it is possible to extract logical change sets from WAL.

The WAL level is a configuration setting, called wal_level. For our needs, we need set to set this to at least archive. PostgreSQL will refuse to start if you request archiving but wal_level is less than this.

If your PostgreSQL server is having a peaceful day with a low transaction rate, it may take a while to fill out one complete WAL file. From an operations perspective, though, it is usually a good idea to have at least one WAL file backed up every X minutes (or hours or days, according to your setup).

The setting archive_timeout can be used to tell PostgreSQL to generate at least one WAL file every “archive_timeout” duration, even if it is empty.

PostgreSQL offers a few levers to control the number of WAL files that lie around in the pg_xlog directory.

The settings min_wal_size and max_wal_size place limits on the the total size of the WAL files. Having a minimum limit allows recycling of old files (they are renamed first). The upper limit is a soft limit, because the server can safely delete only those files which have been successfully archived.

The wal_keep_segments can be used to set a minimum limit for the number of WAL files in pg_xlog. This is mainly to allow for slow or intermittent standby servers.

Finally, there is the archive_mode setting, which obviously must be set to on for archiving to work. Here are the important settings for archival, rounded up:

Restoring WALs is usually done in the context of restoring from a backup, doing a point-in-time recovery (PITR) or streaming replication. It is a bit too extensive to cover in this same blog post, so we’ll just have to do this as another post – stay tuned!

You can read about streaming replication in our other blog post called “All About PostgreSQL Streaming Replication”.

PostgreSQL provides a statistics collector that can be queried to examine the state of WAL archiving. Specifically you can use the pg_stat_archiver to see the WAL success and failure counts.

With OpsDash, you can quickly start monitoring your PostgreSQL servers, and get instant insight into key performance and health metrics including WAL archiving. 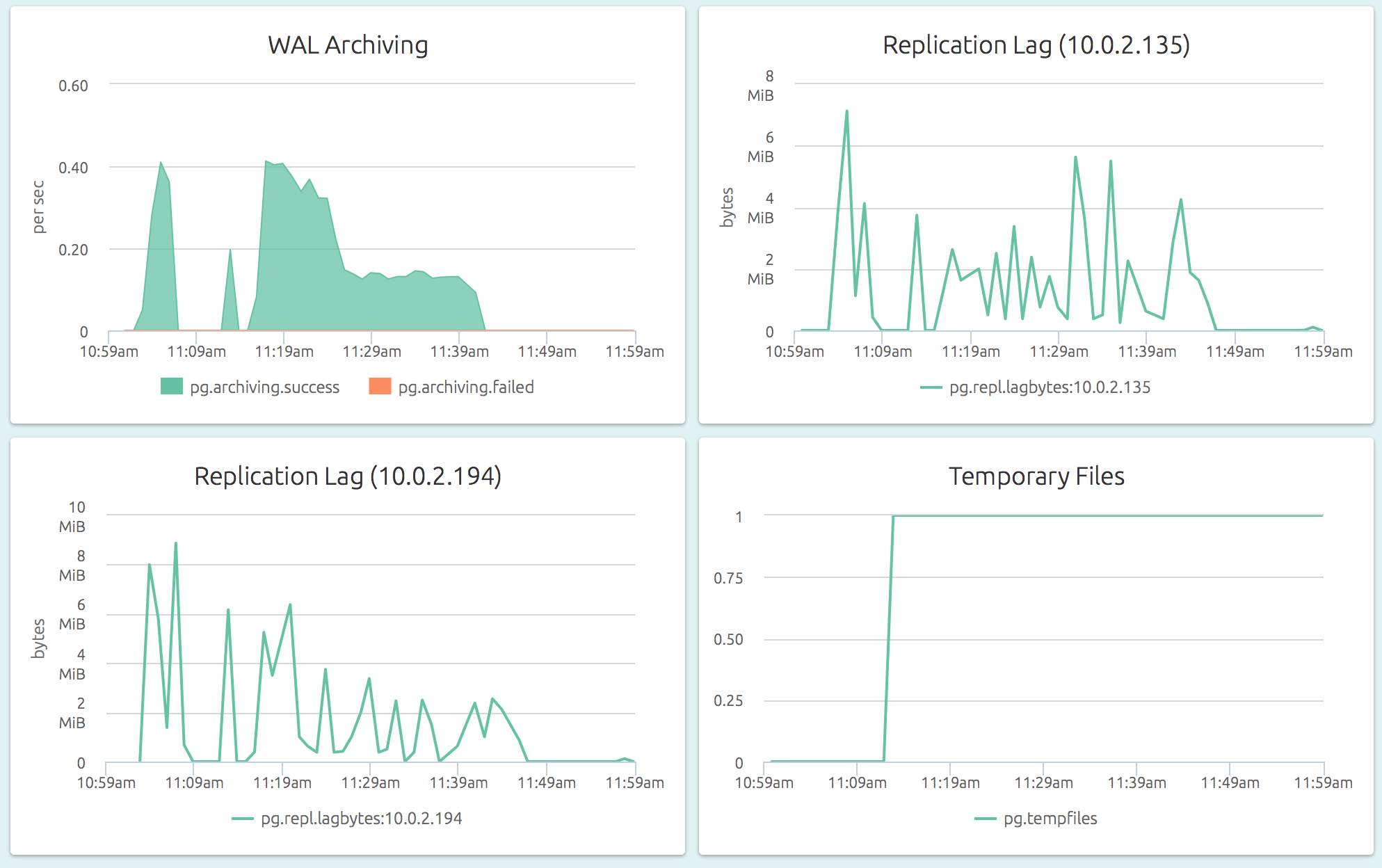 Adding a threshold-based alert to the archive failure count metric is a quick and easy way to catch a failing archival job before it gets out of control and WAL files eat away your server disk space.

OpsDash is available as a self-hosted, on-premise solution and as a SaaS solution. Choose what’s right for you!

Prefer SaaS? Signup for the beta!