Monitor a broad range of ARM devices with OpsDash!

ARM devices for general purpose computing, running a regular Linux OS, are becoming increasingly popular. They are much more energy efficient than their Intel counterparts, and have much better price-per-watt numbers. ARMv7 and ARMv8 servers in the public cloud have become a reality, with on-demand offerings from providers like Packet and Scaleway.

Packet recently announced their Type 2A server, a 96-core Cavium ThunderX ARMv8 machine with 128GB RAM. At $0.50/hr, those 96 cores are great value for money, especially if your workload is inherently parallel.

Once you have your instance up and running, you can start monitoring with OpsDash in a matter of minutes. OpsDash provides intelligent, out of the box dashboards for ARMv8 monitoring that include a pre-selected set of recommended graphs and metrics. The OpsDash Smart Agent automatically discovers disks, filesystems and network interfaces that need to be monitored. You can, of course, customize the dashboards if you like to meet your particular needs.

Check out the dashboard below, where you can see all the 96 cores idling. 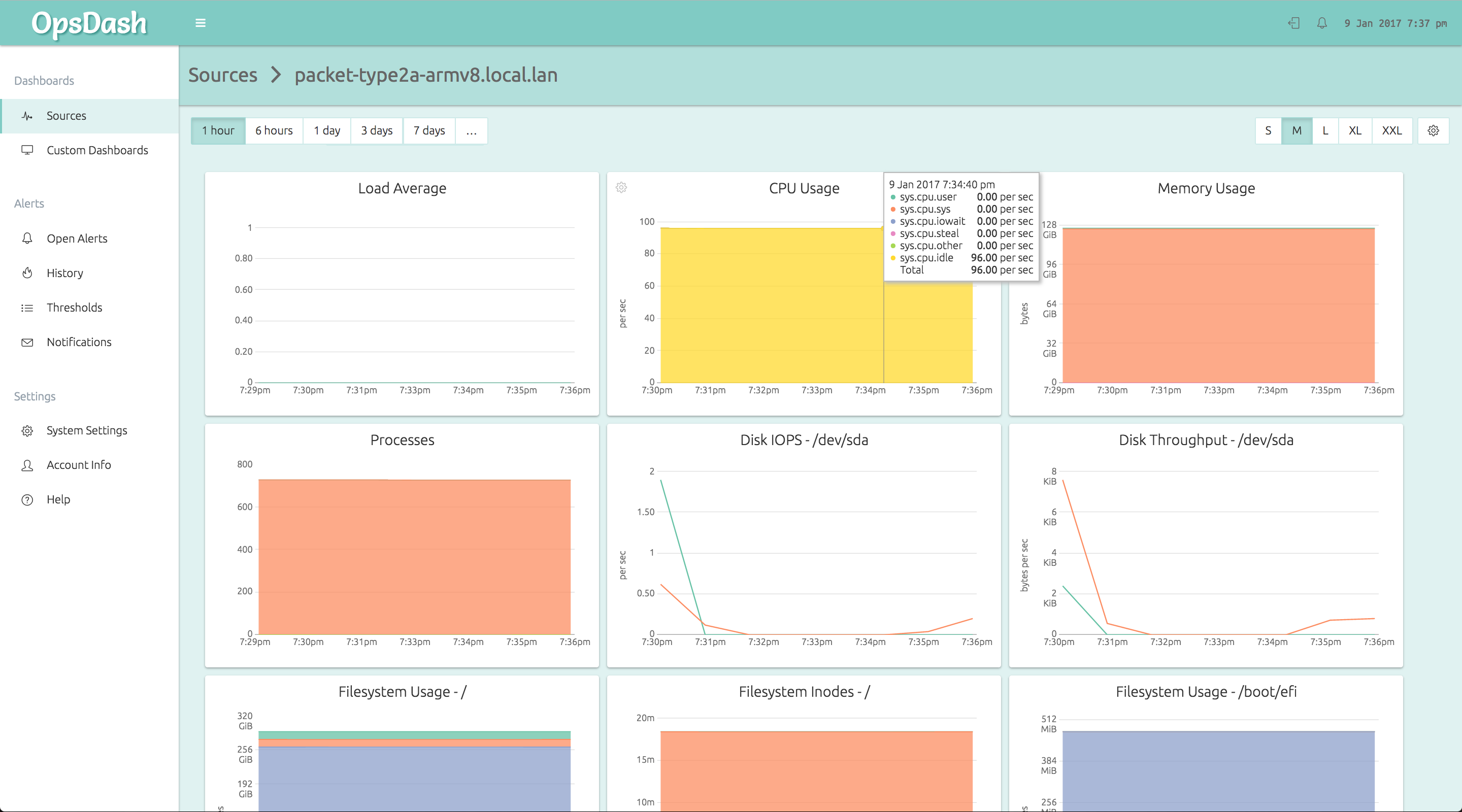 To setup your OpsDash monitoring, all you’ll need to is to install the OpsDash Smart Agent with these steps:

You can Sign Up for our SaaS Beta and find out more here.

You can monitor your ARMv7 instances on Scaleway in a very similar way. Once you’ve setup your Scaleway instance and signed up for the OpsDash SaaS Free Beta, you just need to follow the steps here, and you can be up and running with your ARMv7 monitoring in just a few minutes. 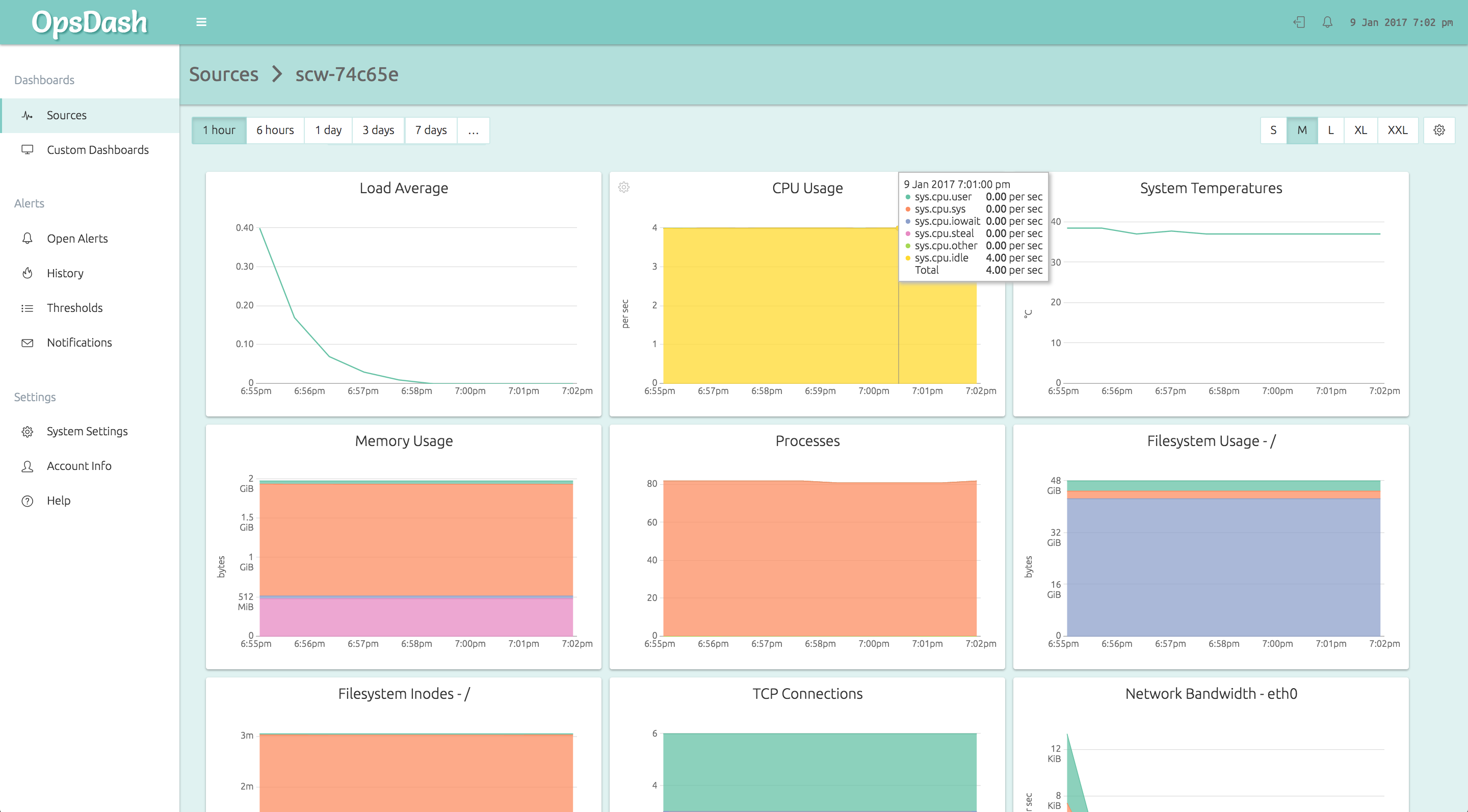 Want to check this out with your own Raspberry Pi? You can do that too!

The first generation Raspberry Pi and the Raspberry Pi Zero have a single-core ARM1176 processor with a 32-bit ARMv6 architecture.

We are running the OpsDash Smart Agent on a Raspberry Pi 1 Model B+, with 512MB RAM. The agent automatically detects disks, filesystems and network interfaces that are worth monitoring. The dashboard is automatically setup like the way you see below – no manual creation or editing required. 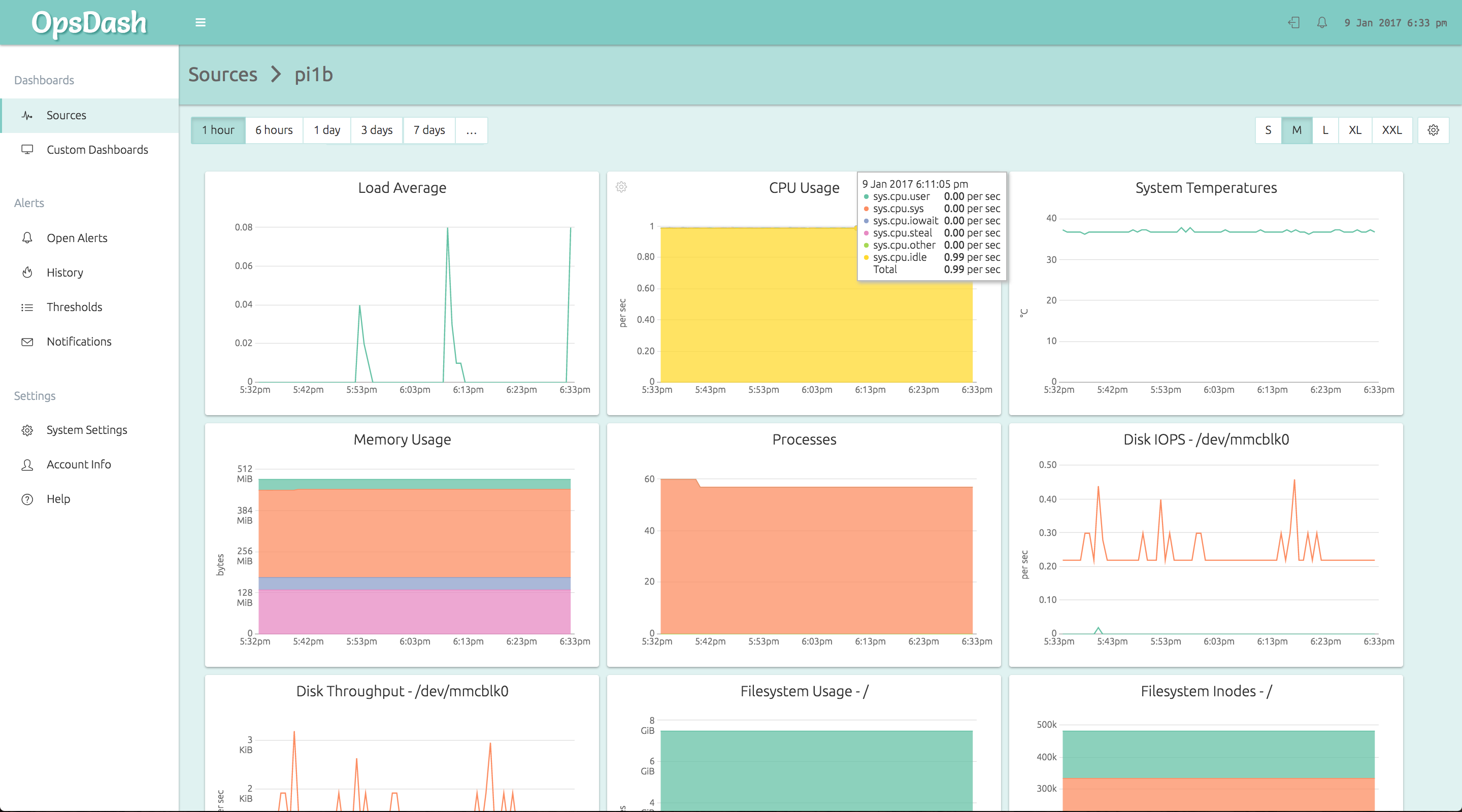 You can see that there is an 8GB SD card being used as the root filesystem.

Once you’ve setup your Raspberry Pi (any model is fine) and signed up for the OpsDash SaaS Free Beta, you just need to follow the steps here, and you can be up and running with your ARMv6 monitoring in just a few minutes.

OpsDash can be used to monitor ARMv6, ARMv7, and ARMv8 infrastructure. Monitor your Packet or Scaleway setup or even your own Raspberry Pi. Signup for the OpsDash SaaS beta and check it out for free.